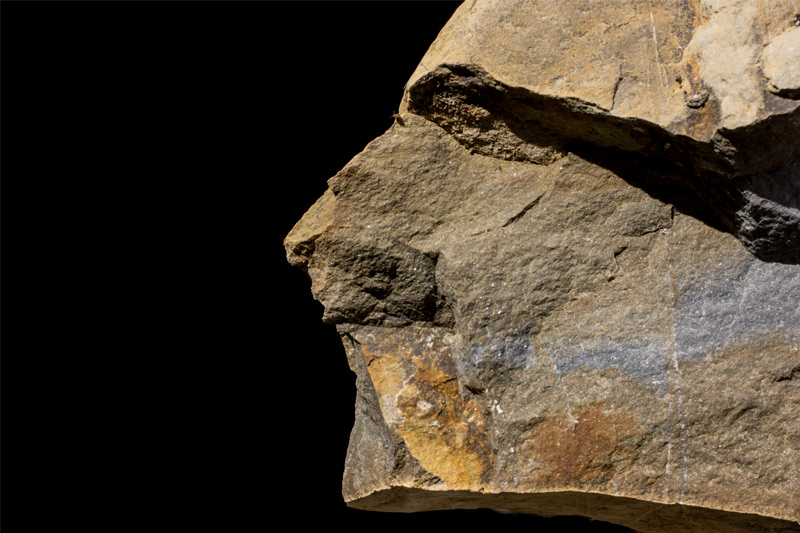 The Story of a broken Rock called Schrödinger

Sometimes when I get back home from the creek, with a pile of rocks wishing to be portrayed, I end up with some, which have lost all their character on the way.

I try to find the perspective and lighting, which made me pick them up in the first place, every now and again. In the meantime they stay on the porch, stopping the table cloth from getting blown away by the wind, if they´re big enouch.

One particularly boring one had been there for years, untill I picked it up once again for yet another examination, and dropping it by accident on the pavement, where it burst into several pieces.

This colorful character appears to have been inside the rock, waiting for release. Or did he only come into being the moment I dropped the rock? Or at the moment I started to become Aware of him?

But then, why did I feel compelled to pick up the rock he came out of, and keep it on my veranda for years, before dropping and brakeing it, in the first place?

It reminds me of the old paradoxon - If a tree falls in the forest, and there is noone there to hear it - does it make a noise?

During my attepts to gain a better understandig of a photographer´s raw materials such as light, which, by Definition is what we paint with, I´ve come to realise that this paradoxon doesn´t derive from Zen thinking, as I allways thought, but from the equally wonderful world of Quantum Physics.

So what other name would be anywhere near as appropriate for this character, as that of the man with the famous cat - Schrödinger